If you see a pigeon that is pecking at seed but missing it, tossing seed backwards over its head when it manages to pick one up, twisting its head at an unnatural angle or upside down , looking dizzy , 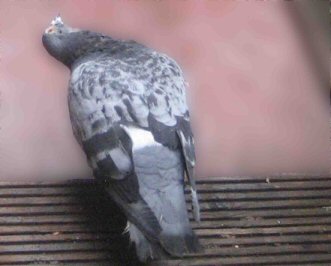 looking drunk or spinning in circles, then the most likely cause is pigeon paramyxovirus.

This is a list of the symptoms that you could find in a pigeon with Paramyxovirus, not all affected pigeons display all the symptoms:

Despite the severity of the symptoms the pigeons don’t often appear to be in discomfort or ill, we tend to describe them as “otherwise well”!  However, the pigeon will need to be caught in order to isolate it from other pigeons that might become infected and to give it  the supportive care that it will need to survive the disease.

Pigeon PMV can damage a pigeon’s nervous system.  Some pigeons make a quick recovery but can have the symptoms (not the virus) return weeks or months later, some will take longer as the healing process can be very slow, others will have residual nervous symptoms for the rest of their lives and will be unreleasable.

If you decide to take a pigeon with paramyxovirus to a rescue centre or to a vet the most likely outcome is that it will be euthanased, because PPMV is an infectious disease that requires the bird to be isolated from other pigeons for at least 6 weeks and most centres don’t have the resources to do that.   However, there are a few rescue centres that are equipped for nursing pigeons with PMV and some will be able to offer them a permanent haven if they don’t make a complete recovery.

The incubation period can vary from a few days to several weeks. The most common symptoms seen by the rescuer, though only a few will be seen at the same time are : Pigeon turning in circles, difficulty picking up seed, pecking and missing, tossing seed backwards, staggering, extremely watery poops, thin broken solid droppings in a pool of liquid, fine tremor of eyes or head somersaulting in flight, crash landing, twisting neck, head upside down (torticollis, star gazing) , spiraling in flight, flying backwards , having fits, walking backwards. 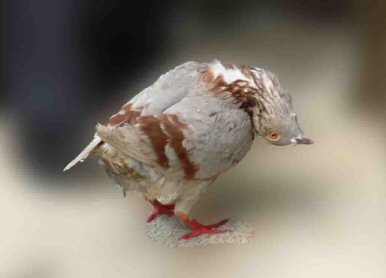 Some of these symptoms are found in other illnesses, but not in the same combination.  The presence of PPMV antibodies can be established by a blood test, I would advise anyone who suspects PMV and wants this confirmed, or wants to eliminate other causes of the symptoms, to use the Retford Poultry Partnership postal testing service.

During the recovery period keep pigeons with Pigeon PMV in a quiet, warm (not hot) cage with soft flooring away from any intense light source.  Provide a brick for perching.

To ensure that they are able to pick up food  place seed in a deep dish so that if they stab at random they can pick seed up.

Because Pigeon PMV can cause fits pigeons are at risk of drowning but they need free access to water. Provide water (with added electrolytes if possible) in a deep narrow container to minimise the risk of accidental drowning. Watch the pigeon to ensure it is drinking.

Hand feeding may be necessary. Frozen peas and sweetcorn thawed in hot water for about 10 minutes can be hand fed as in this video.

To work out how much food a pigeon needs, weigh the pigeon and the peas...feed the pigeon 1/20 (5%) of its weight in peas twice a day.  For example, if a pigeon weighs 300 grams it would need 15 grams of peas and corn twice a day.  If the pigeon is thin, or if it loses weight add a few more pieces at each feed.

If the pigeon is difficult to feed, then give the peas and corn in several small meals.

The disease runs its course in about 6 weeks, by that time the pigeon has stopped shedding the virus and won't infect other pigeons but nervous  and gastro-intestinal symptoms may persist longer.

Vitamins should be given to boost the immune system. Probiotics can be used to crowd out any bad gut bacteria and electrolytes can be given to replace the electrolytes lost through polyuria (passing a lot of water).

I have found that providing a calcium supplement on arrival (Gem Calcium Syrup with Vitamin D3) has helped. The dose I gave was two drops a day for 3 days.

I have had some success treating the paralysis/stroke symptoms of Pigeon PMV using the homeopathic remedy Conium Maculatum (common hemlock) dosing with a single tablet of the 30 potency three times a day for up to 10 days.  As the pilules must not be handled I find it easier to use plastic tweezers to pop them into the bird's mouth. Birds that tremble and fall over when they try to move because their balance is impaired may benefit from Argenitum Nit 30 potency, one tablet given 3 or 4times a day for up to 2 days. Belladonna can be used for birds that are restless with convulsive movement and jerking limbs. 2 pilules twice a day.

Homeopathic remedies should be given 20 minutes after food.

Pigeon PMV is highly infectious to other pigeons , victims should be kept isolated from other birds for at least 6 weeks. Maintain scrupulous hygiene , regularly disinfecting food and water containers with bleach. Always see to a pigeon with Pigeon PMV after you have treated your other birds. That reduces the risk of carrying the infection to other birds in your care.

The virus is mainly shed in the droppings and spreads in fecal dust,so make sure you wash your hands after contact and take care not to track fecal waste or carry fecal dust to areas where other birds are. Dispose of droppings wisely, they can be a source of infection to feral pigeons.