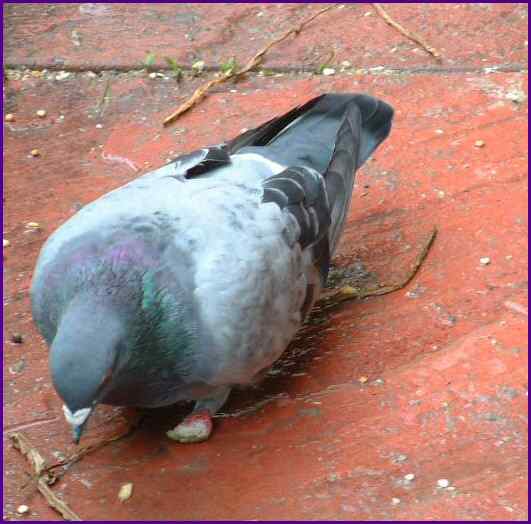 Some people will try to put this  down to an illness or disease.  Pox is the only pigeons disease that affects the appearance of the feet, but the main cause of the deformities that we see is the carelessness of human beings about the way they dispose of thread, fishing line and even their own hair, which becomes entangled in pigeons feet.

Eventually the tissue below the string will become blackened and die.  Individual toes and sometimes the whole foot will be severed, often causing a major bleed.  Infection will aggravate the injury.

In cases of recent entanglement and fairly loose thread, this can be relatively simple and done on the spot if necessary (I always carry a foot repair kit with me) . When thread is embedded or of long-standing, it can be a delicate process which is better done at home.

In the worst cases the solution may be to have the entire foot amputated below the hock joint by a vet, leaving a stump for the pigeon to walk on. 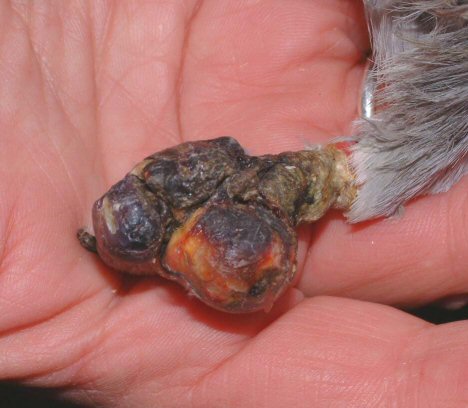 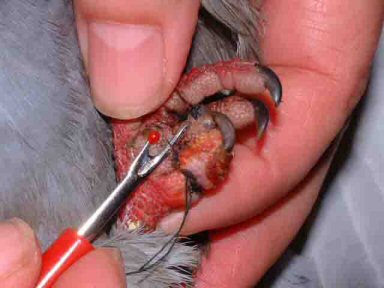 I usually start by rubbing Bach Rescue Cream (available from Boots and Neals Yard in the UK) into the foot, this softens any muck and, in my experience, also loosens the string, probably because it reduces swelling.

In a lot of cases the thread or string is visible and therefore quite easy to remove just by patiently snipping and unwinding. It sometimes takes several goes, with rests for the pigeon and the rescuer in between. I always cut the bit that links the feet together first, so that if the pigeon escapes it is that little bit better off.

When all the thread is removed I treat open wounds with antibacterial cream immediately and continue to do that 3 times a day if I have had to keep the pigeon in. 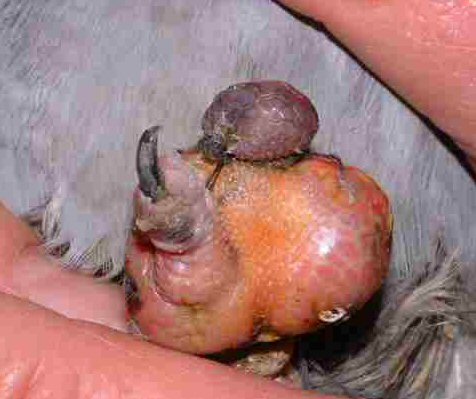 Lumps or pustules on feet, toes and often beak. 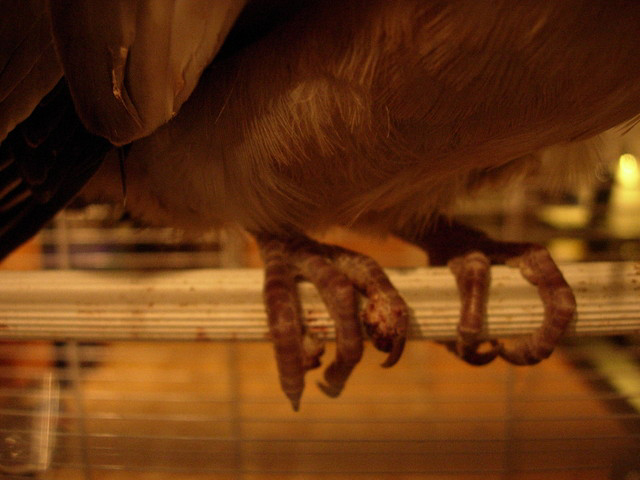 This is very likely to be pigeon pox.  It doesn’t affect humans but can spread between pigeons via saliva in shared water, baths or through beak to beak fighting or via a bloodsucking insects such as the mosquito.

The disease can be mild and self limiting in feral and racing pigeons, although sometimes they are so badly affected that they can’t eat and sometimes can’t see, so they need supportive care while the disease runs its course. The internal form is more serious, recognised by yellow deposits in the mouth that resemble trichomoniasis (canker) and often results in death.

In wood pigeons the disease is more serious, often becoming internal, affecting juveniles that have not yet developed a strong immune system, most often in autumn.

It is rare, but this can happen and when it does it is frightening so it is best to be prepared.

Sometimes a pigeon with severe thread injury will lose his foot as the combined cutting effect of the thread and the deteriorating blood starved tissues will cause the foot to become detached…but this involves te severing of the artery.  It can be dealt with.

The first thing you need to do is to raise the foot to slow down the blood flow.   Then press a clean pad of cloth against the stump…it may be necessary to apply a tourniquet.

The loss of blood can lead to shock, to fight this keep the pigeon quiet and warm, on a hot water bottle or a heat pad such as a Snuggle Safe, or under a 40 watt bulb in a lamp (ideally an angled desk lamp).

The loss of blood can also lead to dehydration, so mix up some rehydration solution (1 pint warm water, 1/2 a  dessert spoon of sugar and 1/2 teaspoon of salt.  Mix it well and pour some into a small container such as a ramekin or an egg cup and lift it to the pigeon’s beak allowing the beak to dip in the solution but not covering the nostrils.  This should encourage the pigeon to drink.  Leave the container close to the bird so that it can top up if required.

The stump will usually heal well enough for the pigeon to walk on it.  I have seen pigeons in the wild lose a foot and recover with no human help.

Danny, the pigeon in the photograph,  lost both feet and was left with stumps.

We decided to keep him in the protected environment of the aviary, where he had found a mate while recovering. he lived a long and happy life.

This happens quite often when pigeons have injured or deformed feet.  they step in poop and gradually a rock-hard ball of poop forms, which is heavy and uncomfortable for the bird.

Don’t try to pull the ball off immediately as this could damage the nail sheath.  Instead, dissolve a tablespoon of salt in warm water and place the pigeon’s foot in it to soak.  This loosens the hold that the poop has on the toe very quickly and you  will be able to slip the ball off with no pain or damage to the pigeon .

This saline mix is also useful when you have caked formula on the feathers of baby pigeons, just dampen the affected areas and wipe with a damp cloth.