It was a nice, clear, warm day and I was enjoying watching the pigeons doing a formation flight above me when I was distracted by two teenagers who were shrieking and cowering under a magazine held above their heads, presumably to shield them from falling poop.   I  couldn’t help stopping to reassure them that the pigeons wouldn’t poop during this flight, so they could relax and enjoy the sunshine. This incident inspired me to dedicate a page to the enthralling subject of pigeon droppings!

The pigeon’s excretion system is not the same as that of a mammal.  The food passes through the digestive system and empties from the rectum into the cloaca. 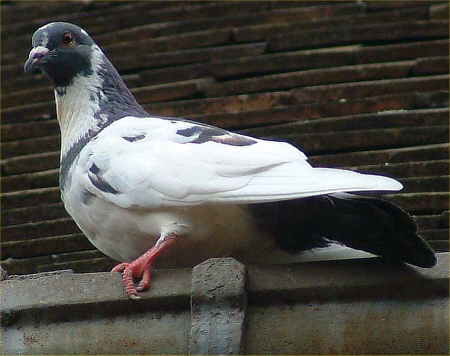 This literally means “cesspool” and is the “emptying place” for both the digestive and the urogenital system in pigeons.   The pigeon has the ability to hold the action of defecating and to contain a considerable volume of poop in the cloaca without relief (Levi, The Pigeon), so unlike humans it is never “caught short”.

When pigeons are about a week old they learn to step backward before pooping and they continue to do this during their adult life, which is why you are likely to be pooped on by a perching pigeon if you are in the wrong place at the wrong time.

The situation is different when pigeons are in flight. Pigeons are designed for flapping or “powered” flight rather than for soaring or gliding flight like the seagull (which admittedly does poop on humans, sometimes deliberately) – so when a pigeon takes off it will immediately begin to draw its feet backward under its body to assist with flight and balance.  The feet are held back until the pigeon is about to land, when they are thrust forward and down.

If a pigeon were to poop in flight it would have to risk the poop landing on its feet as they are held below the vent (anus), or it would have to lower its feet.  Both of these actions would affect the dynamics of flight. So they don’t do either.

You will usually see a pigeon poop when it is perching on a ledge or branch, or when it is foraging…but not when it is flying overhead.

Today there is an unreasonable hysteria about pigeon poop, but in earlier times it was so valuable as a fertiliser that it was used as a dowry and left as an inheritance!   Even today it is probably the best organic fertiliser for vegetable patches that you can find (after it has been composted, of course).

An officer of London Wildlife Protection wrote to the Department of Health to establish whether pigeon poop is a hazard to human health and if so to what extent.  Their reply should reassure even the most cynical pigeon hater or pest controller:

‘Thank you for your recent email to the Department of Health regarding health risks associated with feral pigeons. Your email was passed to the Emerging Infections and Zoonoses section in Public Health England.

We are not aware of any cases of human infections associated with contact with pigeon faeces.

Whilst wild bird faeces including pigeon faeces can present a potential hazard from infections such as Campylobacter and Salmonella via faecal-oral transmission (i.e. when contaminated bird faeces is accidentally swallowed), there is limited documented supportive evidence for this occurrence. The use of simple hygiene precautions especially hand washing after touching potentially contaminated materials and before eating or drinking should reduce the risk of infection via the faecal-oral route.

A review of human health hazards posed by feral pigeons in 2004 concluded that, “In spite of the worldwide distribution of feral pigeons, the close and frequent contact they have with humans, their use as food, and the high prevalence of carriage of human pathogens, zoonotic disease caused by feral pigeons is infrequent. Although feral pigeons pose sporadic health risks to humans, the risk is very low, even for humans involved in occupations that bring them into close contact with nesting sites.” (Haag-Wackernagel & Moch, Health Hazards posed by Feral Pigeons, Journal of Infection, 2004, Issue 48 )

There are some health hazards associated with pigeon droppings, but these are not as dire as pest controllers and local authorities would lead us to believe:

Like all fecal matter (human and animal) pigeon poop can contain bacteria that are harmful if ingested, so it is best to keep pigeon poop away from food that is about to be eaten and from kitchen work surfaces.

The fungus histoplasma capsulatum, if inhaled, can cause histoplasmosis in humans.  There is no record of anyone becoming infected with Histoplasma within the UK but it can be found in river valleys in  Eastern and Southern Europe and has caused disease in parrts of North America..  Pigeons don’t carry or spread  histoplasma, it is not a disease that can be caught from a bird but under the right conditions (temperate climate, damp acidic soil with high organic content)  all bird droppings can produce an environment in which this fungus  thrives if it is there in the first place.

Cryptococcus neoformans is another fungus that is found in the dried droppings of birds, including pigeons. When dried bird droppings are stirred up, this can make dust containing Cryptococcus Neoformans  go into the air. If inhaled this doesn’t normally affect healthy humans but it can cause disease in people with compromised immune systems, such as those with HIV/AIDS, people who have had organ transplants and those who are being treated for cancer. 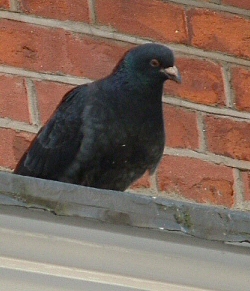 Pigeon poop used to be used as a dowry because it breaks down into a wonderful fertiliser for green vegetables in a very short time.

Use a scraper to collect the poop every day 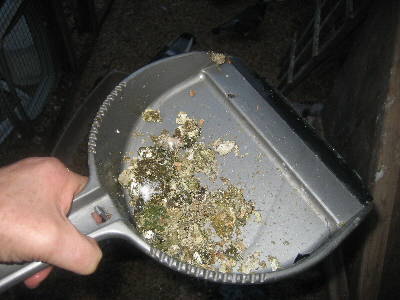 Put the fresh poop in a composter and wait for it to break down: 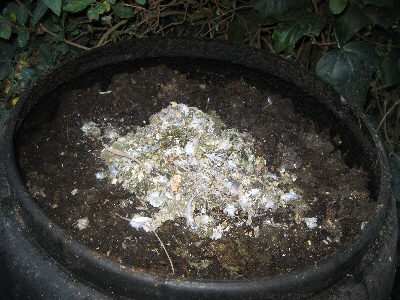 Then use it on an allotment: 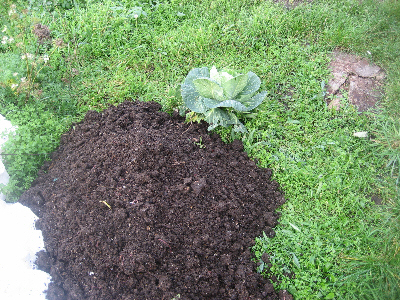