Feeding the pigeons can be a pleasant experience for them and for us…apart, of course, from the harassment by those who have been led to believe that pigeons spread disease.

Pigeons don’t do themselves any favours by congregating in town centres , although it is natural for them to do so: city centre buildings resemble the clifs and ledges that were their original natural habitat and the lofts that were built when they were domesticated and kept in towns as a source of food in the event of a siege.

The number of feral pigeons in this country is quite small, 100,000 breeding pairs compared to over 4,000,000 pairs of blackbirds.  If they spread themselves out over the country they would be rare and probably treasured.  When they congregate in  large numbers in any one location they make themselves visible to pigeon haters and put themselves at risk.

We pigeon lovers really don’t help the pigeons when we put down large amounts of food in the same place for the them to eat every day,  an act of kindness that inevitably causes what is called an “aggregation” of pigeons and will 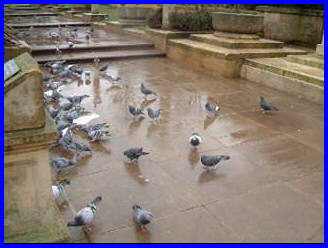 attract complaints from the intolerant.

I once saw a very scruffy young pigeon in a street near my office.  As I had a bag of mixed corn with me I gave it a little handful and walked on.  The next day there were two pigeons there, so I left two handfuls of food…and so it went on, the pigeons and the food increasing day by day until 60 pigeons waited for me each evening.

Soon after my “aggregation” had occurred  a particularly unpleasant man who lived close to my feeding spot threatened to shoot the pigeons and throw them in my garden.  I reported his threat to the police and the officer that attended was actually prepared to issue a harassment warning to him  but I felt that the pigeons would be safer if I stopped feeding them there.   Fortunately it was summer and plenty of other places where people fed them and I was still able to supplement their food.

Pigeons are extremely appealing birds and some will stand in front of you and look you straight in the eye, hoping that you are a kind person that will feed them. 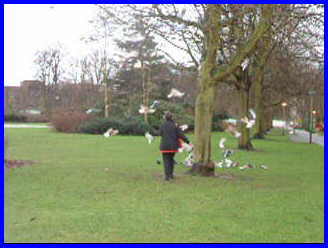 This is something that I can’t resist, so whenever I am likely to come across feral pigeons I take a little food with me ..after all, I will need it if I need to catch a pigeon in distress, such as one with its feet tangled in thread!  But I avoid feeding as a routine and in any great quantity unless there is severe weather such as ice and snow,  which means they would need more food than normal but find less.

I have discussed this with several pigeon feeders and we agree the problem is that when you start feeding pigeons regularly they get to recognise you very quickly  and you also start to recognise and become attached to individual birds: some because of their colouring, some because of deformities, some because they  will hop on your hand or hover in front of you when you arrive…you begin to feel responsible for the flock and to fear that something dreadful will happen if they turn up and you don’t.  And so you become a compulsive pigeon feeder.

I once asked someone whose father was a fancier how much I should feed a feral pigeon and her answer was “just enough to prevent it from starving”. I think that was perhaps a sensible answer. 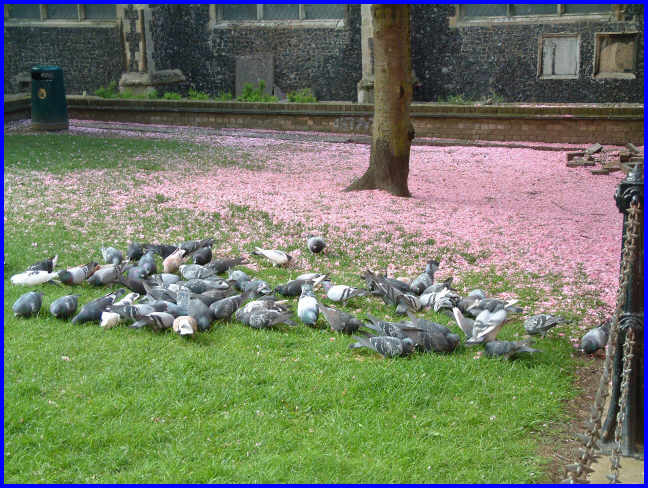 A pigeon will need to eat on average 10% of its body weight a day , usually adult feral pigeons weigh between 300 and 350 gms, so their total daily requirement is 30-35 gms each, about a handful…you will need to give them much less than that if they are not to become reliant on you as their only source of food!

My advice to others would be, if you enjoy the company of feral pigeons and want to feed them make certain that you feed only a little at a time, in different locations, at different times and only every three days and never  trespass on private land to feed them.

Keep them healthy, prevent them from starving but don’t let them become a nuisance to those who would kill them for being there or dependent on you for all their food.

If  pigeons  have to forage for food two days out of three  they won’t have the time of the inclination to raise as many young as they would probably otherwise do.

Although I accept that I need to control my compulsion to feed the flocks every day it was difficult reaching that point.  I believe that there is a strong element of Obsessive Compulsive Disorder in the need to feed the pigeons regularly because of the anxiety that being late or unable to feed the pigeons causes and it is distressing to read of people issued with ASBOS for feeding too much or too often.  One day the authorities will have to look at the cause rather than focus on the punishment

So, if we feed what is the best food?  When I started feeding feral pigeons I read that mixed corn was a good choice of food, but later read that birds raised on mixed corn alone suffer from nutritional 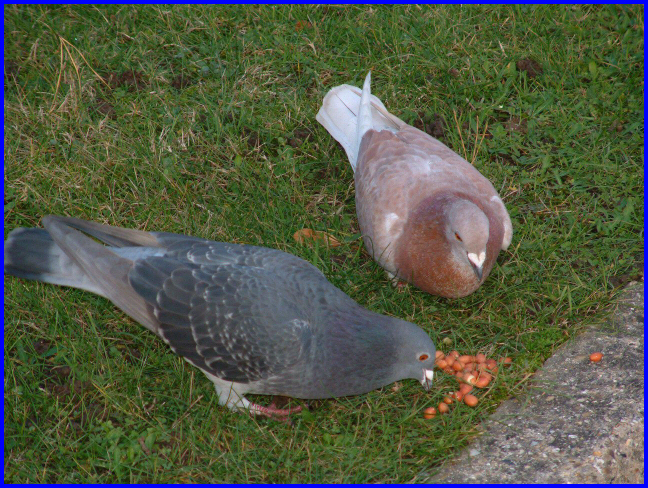 deficiencies so I buy  seed mixes that are produced specifically for pigeons, although a wild bird mix would probably be OK.  As the price of wheat has rocketed the price difference is small.

My choice of food is  Bamfords Super Moulting Mix as it has such a variety of ingredients in it:  Wheat, Barley, Maples, White Peas, Plate Maize, Small Roundberry Maize, Blue Peas, Tares, Red Dari, White Dari, Safflower, Popcorn Maize, Linseed, Naked Oats, Paddy Rice and Small Safflower .  At the moment (April 2011) it costs around £10.20  for 20 kilos.That works  out at around 52p per kilo which is cheaper than bread. 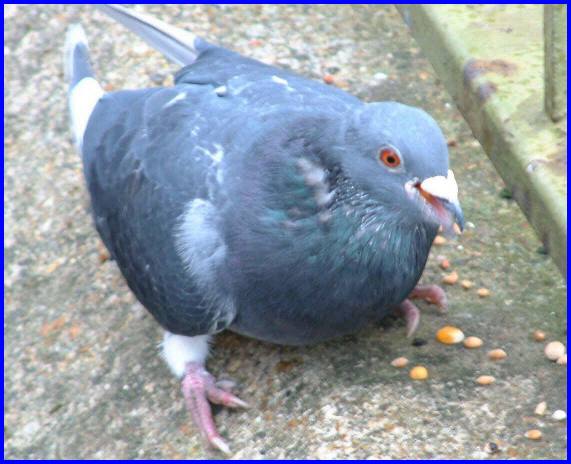